The dimension class is basically how many dimensions in space the maze covers. Types are: 2D: Most mazes are this dimension, it's always possible to display them on a paper sheet and navigate it without overlapping any passages. 3D: maze with multiple levels, where passages may go up and down in addition to the 2D directions. A 3D maze may be seen as 2D mazes stack on each other. Higher dimensions: It's possible to have 4D and higher dimension mazes. These are sometimes rendered as 3D mazes, with special "portals" to travel through the 4th dimension (e.g. "past" and "future" portals). Weave (2.5D): A weave maze is basically a 2D (or more accurately a 2.5D) maze, but where passages can overlap each other. For instance real life size mazes that have bridges passing above other passages. 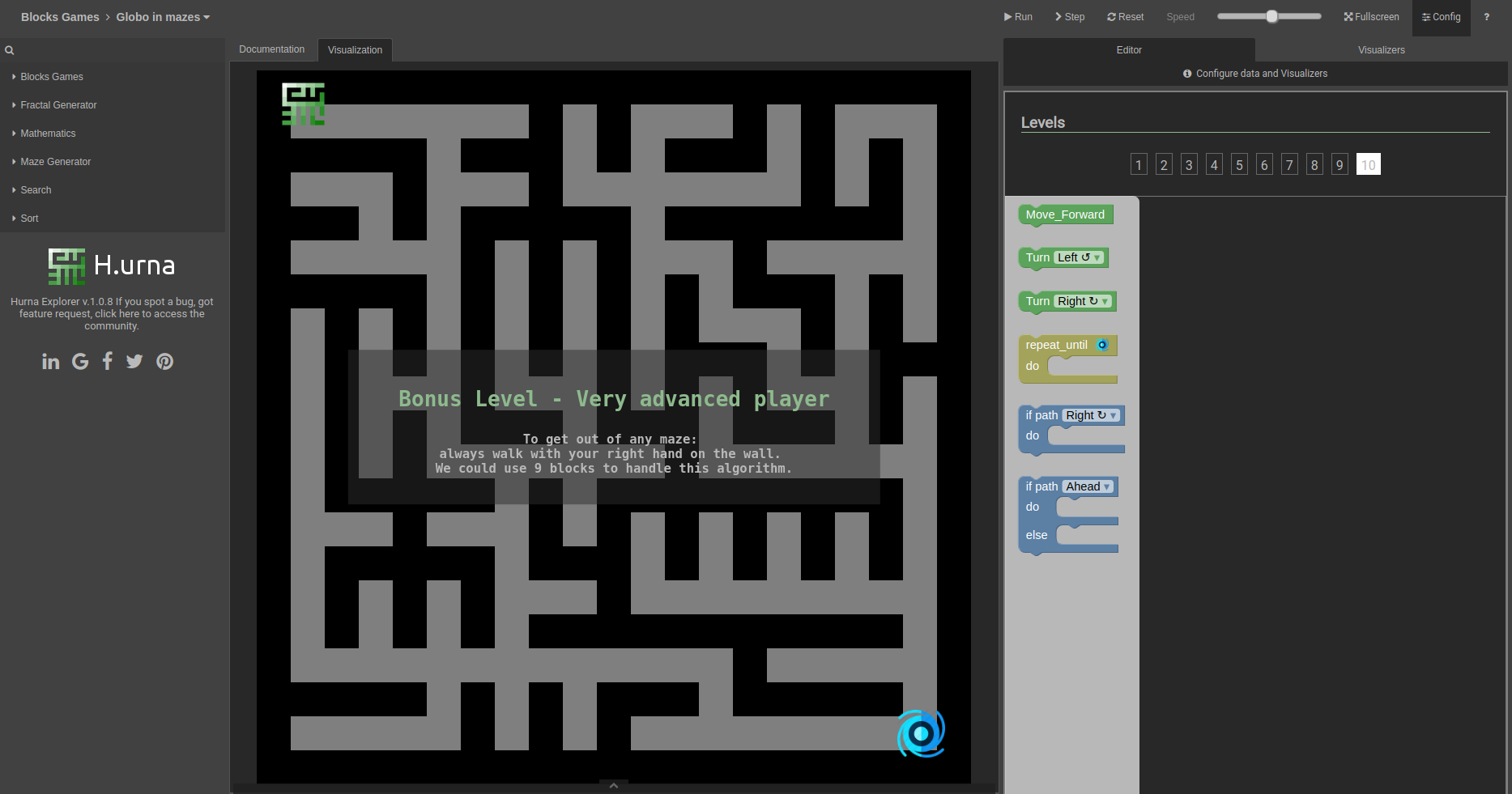 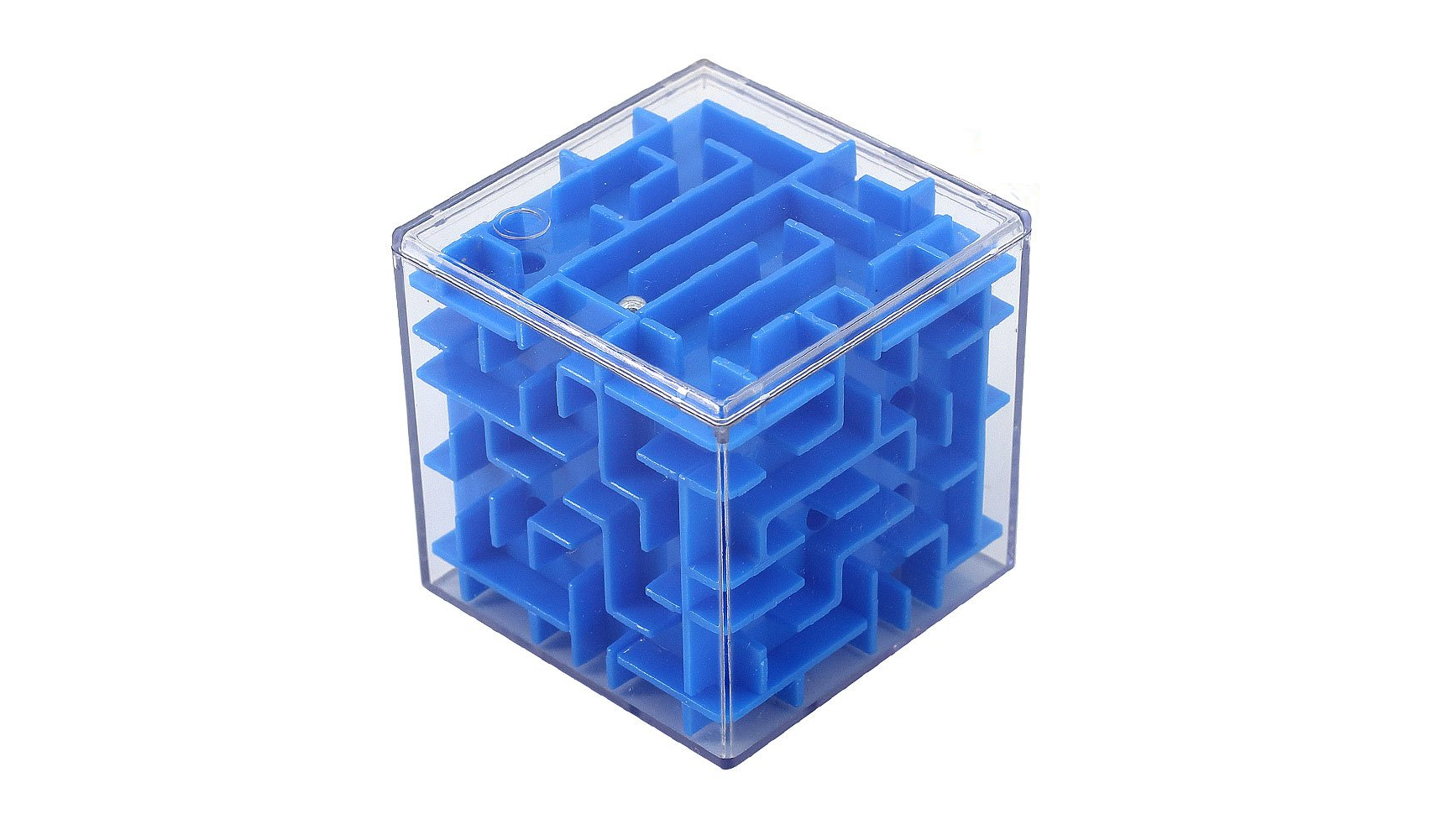 3D: Maze game toys that can be found in some shops 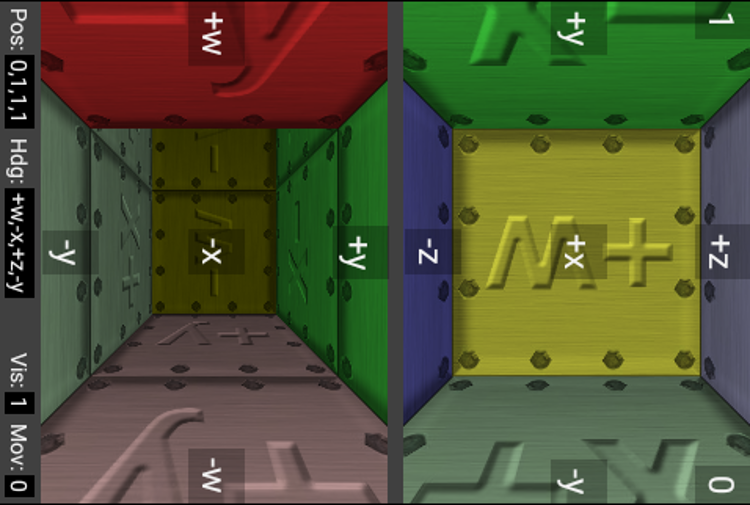 Higher Dimension: Here is a 4D maze game, just think it as a 3D maze that can be modified while playing (e.g. over time, you will have a time controller additionally to the 3D moves). 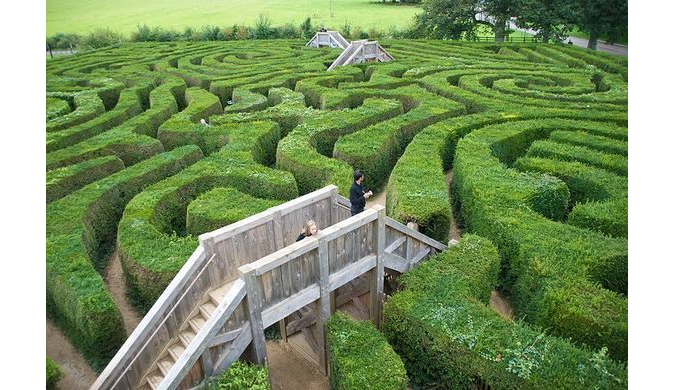 Weave: a real life maze with bridges. This is the Longleat Hedge Maze build in 1975 in England.

If there is direction, it means that certain passages can only be traveled in one way. In Computer Science terms, such mazes would be described by a directed graph, as opposed to an undirected graph.

This is just an algorithmic property (no visual difference at the end) when generating. The focus can be divided into two general types : wall adders, and passage carvers. The first start with an empty space where we add walls while the second start with a full block in which we carve passages. 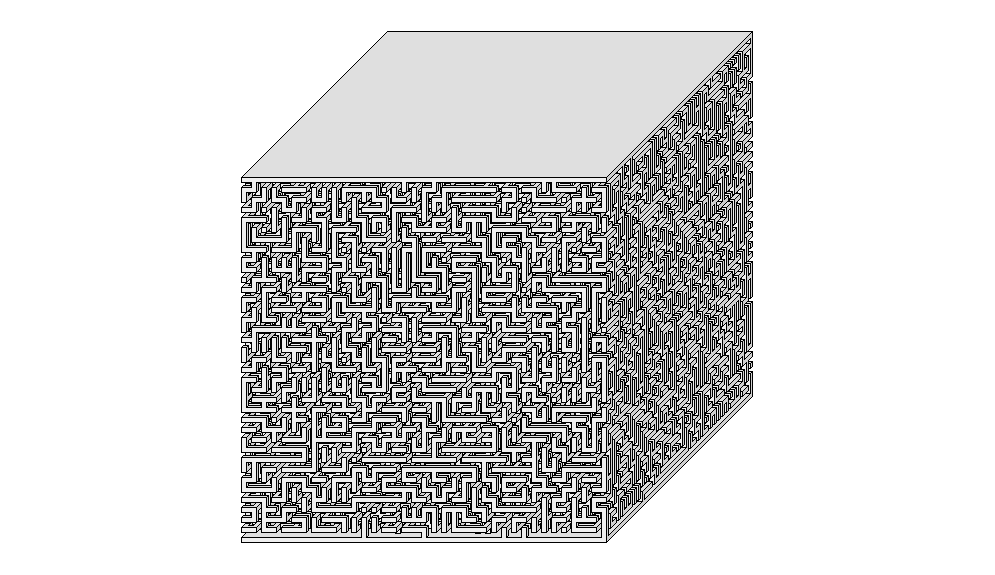 Hypermaze: Orthographic rendering of a perfect, and very complex, hypermaze (73x73x73 cubes). Note there's literally billions of ways of arranging the string across and moving it into one of the hypermaze's faces and because this is a "perfect" hypermaze, only one solution and hence initial starting configuration actually works! Source: Walter D. Pullen using Daedalus Software 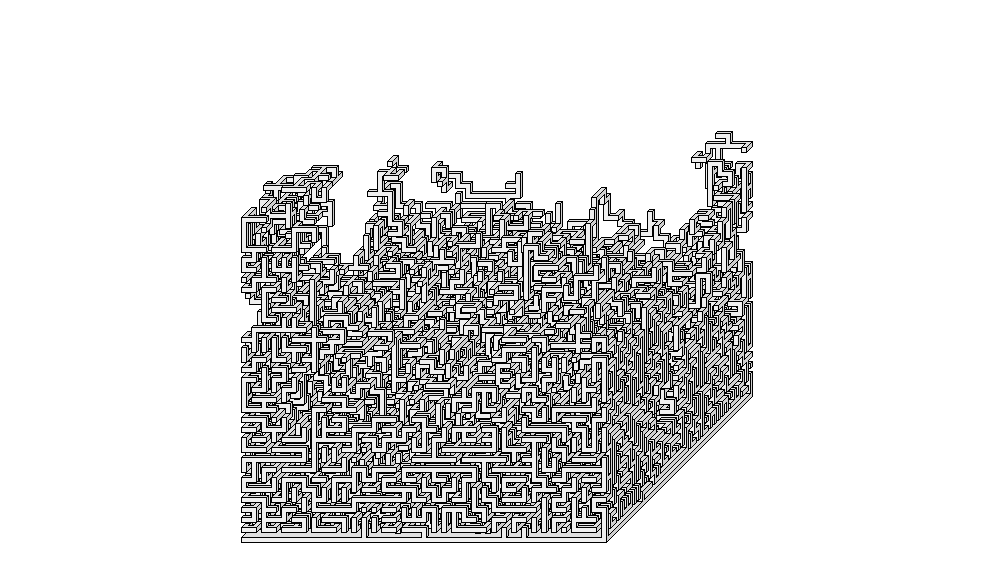 Hypermaze - Solution half: The bottom half piece of the same 73x73x73 hypermaze. This exposes the solution in which the solution surface always follows between the area removed and the area still present. Source: Walter D. Pullen using Daedalus Software 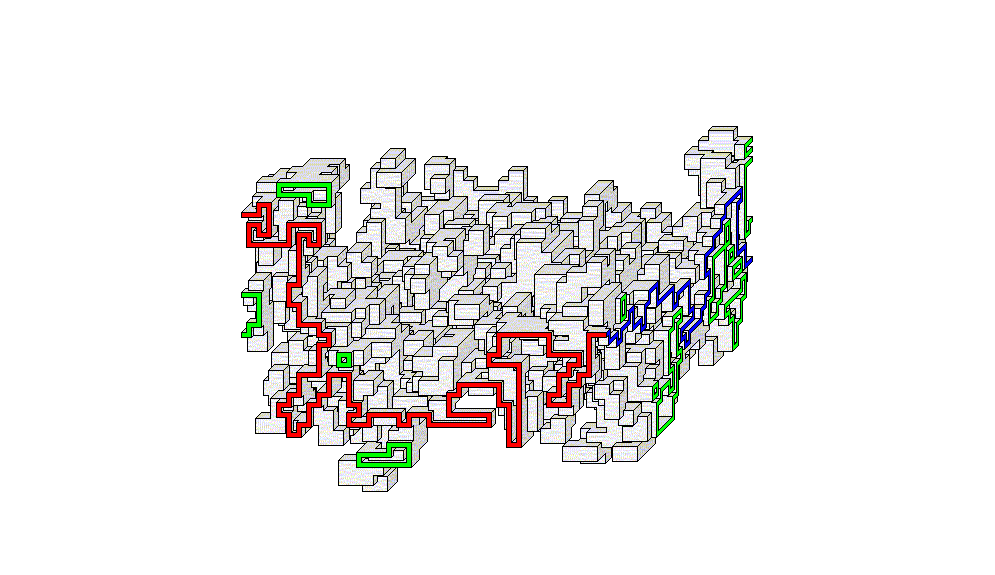 Hypermaze - Unique solution surface: The solution showing the complex solution surface, or the path taken by the string. The edge colored in red is the edge of the surface : the entrance (or exit) line that the string must enter (or exit). The edge colored in blue is the same entrance/exit line along the adjacent face. Edges colored in green are places where the solution surface goes back to and briefly touches a boundary face. This is just a rendering effect to show the solution surface clipped to the boundary of the hypermaze itself, in which the actual solution surface of course has no holes. Note the green figure-8 shaped circuit near the far right edge. That shows an interesting point where two such holes touch. A hypermaze solution surface will never actually intersect itself, but it can briefly touch itself at various points, where some areas may need to be passed through by the solving line more than once. The analogy here is having your thumb and forefinger form a circle, almost touching, where to move the solving line over a solution surface formed by your fingers, it requires moving the line through the narrow space between the fingers twice. Source: Walter D. Pullen using Daedalus Software

Routing refers to the types of passages geometry resulting from the maze generation strategy. Braid - Partial Braid: A "Braid" Maze means one without any dead ends. Such a Maze uses passages that coil around and run back into each other (hence the term "braid") and cause you to spend time going in circles instead of bumping into dead ends. A well-designed braid Maze can be much harder than a perfect Maze of the same size. Note that the adjective "Braid" can be used quantitatively. A "heavily braid Maze" will includes many loops or detached walls. Perfect - Simply-Connected: All the maze generation proposed at H.urna have a perfect routing. A "perfect" maze means being without any loops, closed circuits and inaccessible areas. From each point, there is exactly one path to any other point : the maze has exactly one solution. In Computer Science terms, such a maze can be described as a spanning tree. Sparseness: A sparse Maze is one that doesn't carve passages through every cell, meaning some are left uncreated. This amounts to having inaccessible locations, making this somewhat the reverse of a braid maze. A similar concept can be applied on wall adders algorithms (e.g. the Recursive Division), resulting in an irregular maze with wide passages and rooms. Unicursal: A unicursal Maze means one without any junctions. Such mazes are also called labyrinth, there are no tricks or dead ends : they have a single circuitous path instead and are most often used for relaxation, meditation or spirituality. 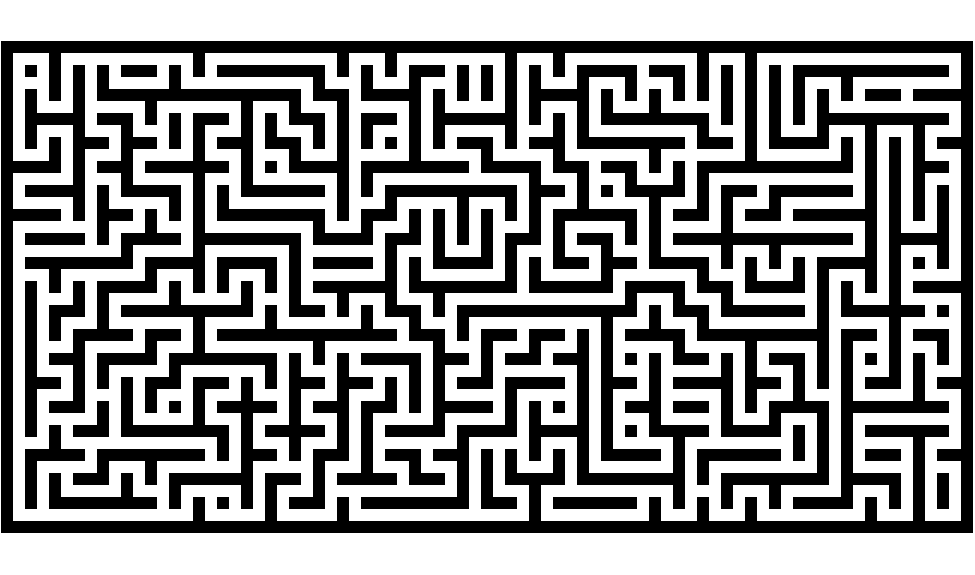 Braid: You won't get stuck in any cul-de-sac. Source: Wikipedia 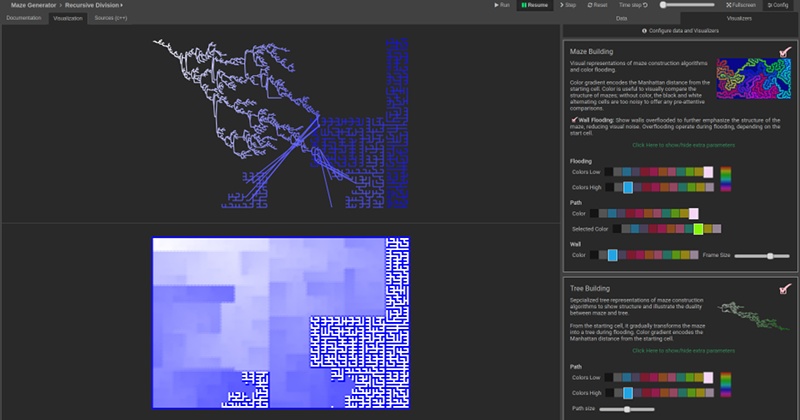 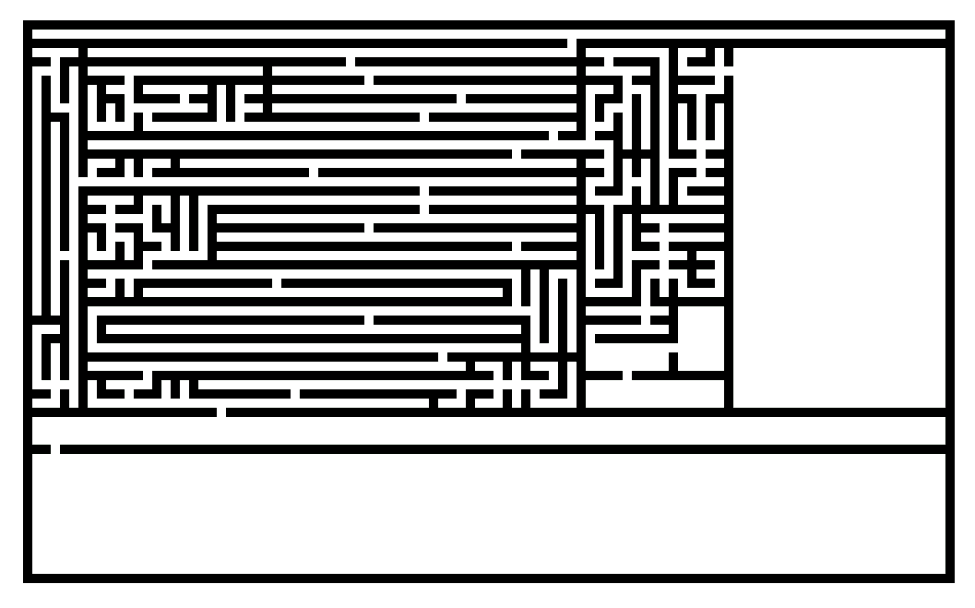 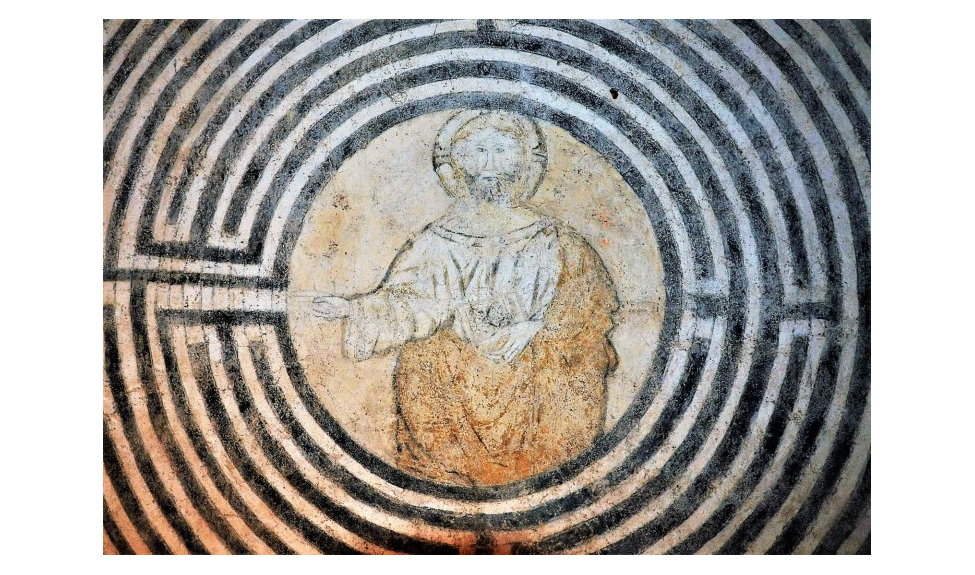 Unicursal: The mysterious Christ in the Labyrinth of Alatri showing unicursal pattern.

The tessellation class is the geometry of the individual cells that compose the maze. You may imagine any geometry you want; here is a small list of the common ones : Orthogonal (Rectangle cells), Crack (Amorphous), Delta (Triangle cells), Fractal (Recursive), Omega (Non-orthogonal), Sigma (Hexagon cells), Theta (Concentric Circles of passages), Upsilon (Octagons and Squares cells), Zeta (Orthogonal with diagonal passages allowed)... Images talk more than words, see below some of those 'common' types: 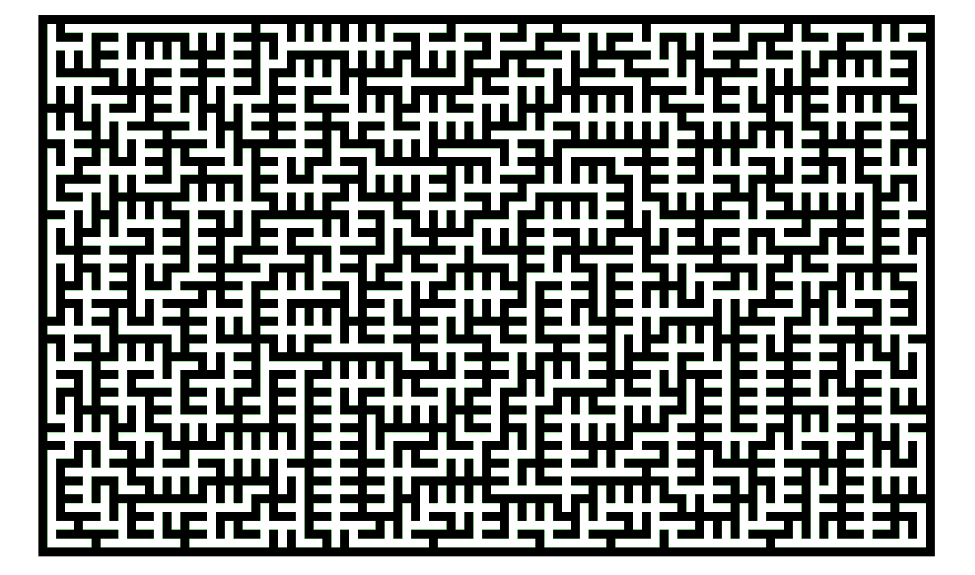 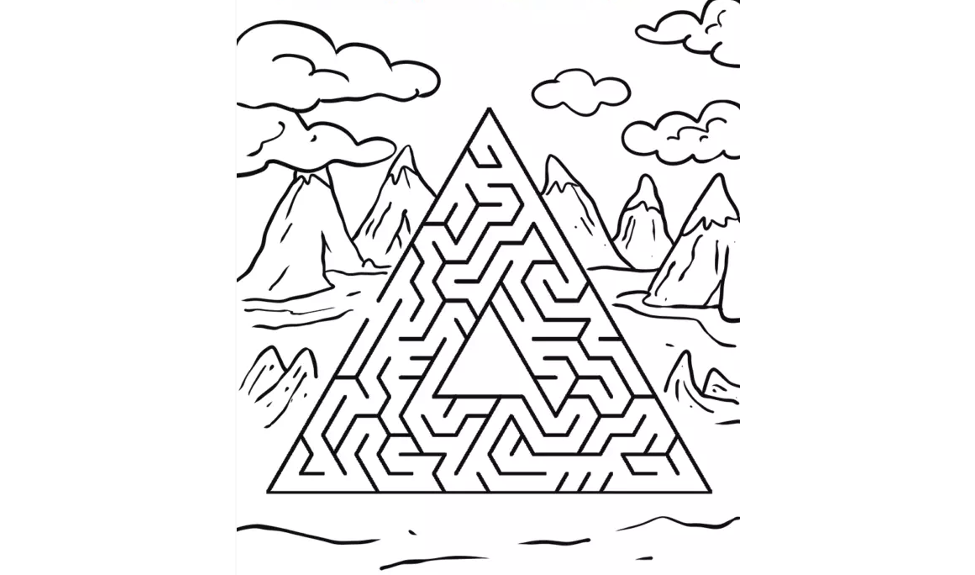 Delta: A Delta maze is composed of interlocking triangles. 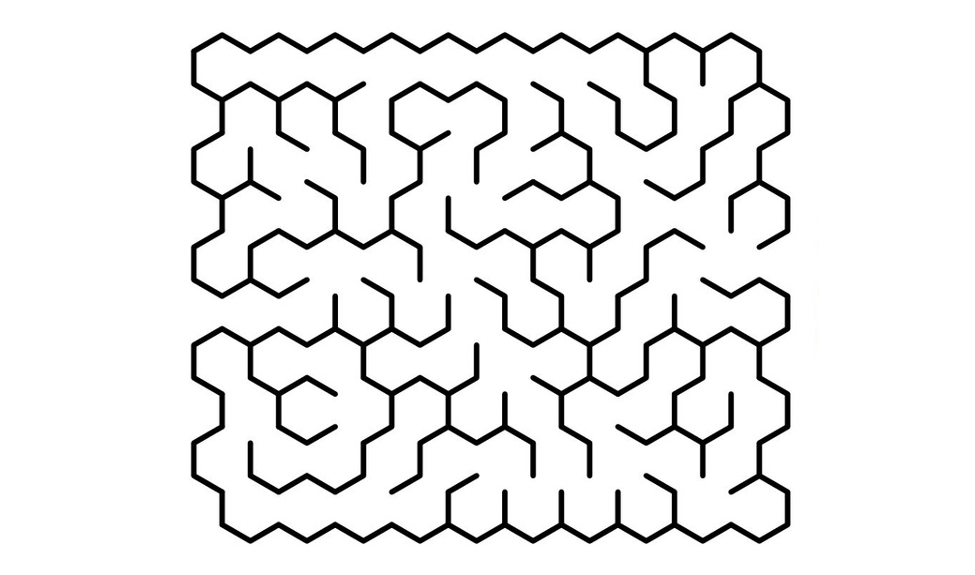 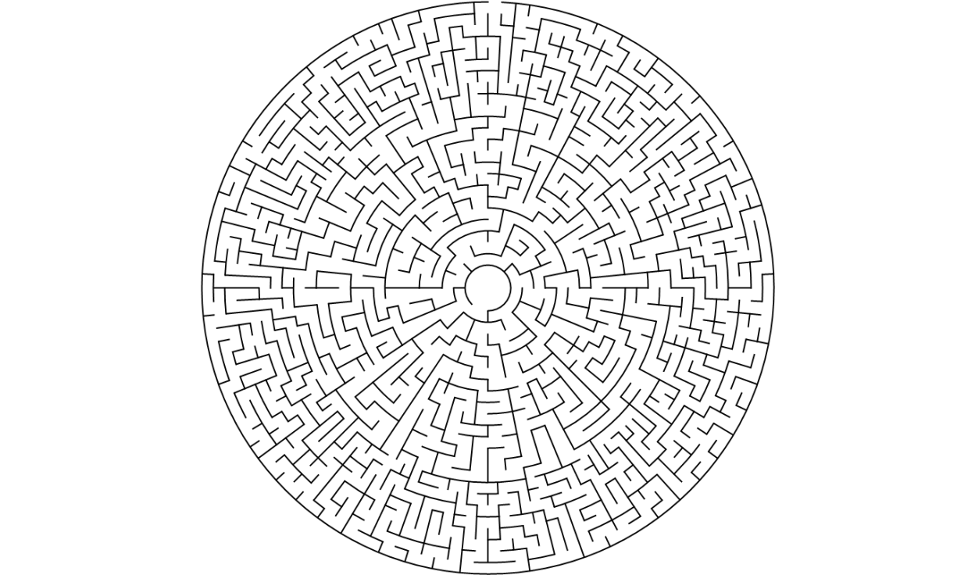 Theta: A Theta maze is composed of concentric circles of passages. 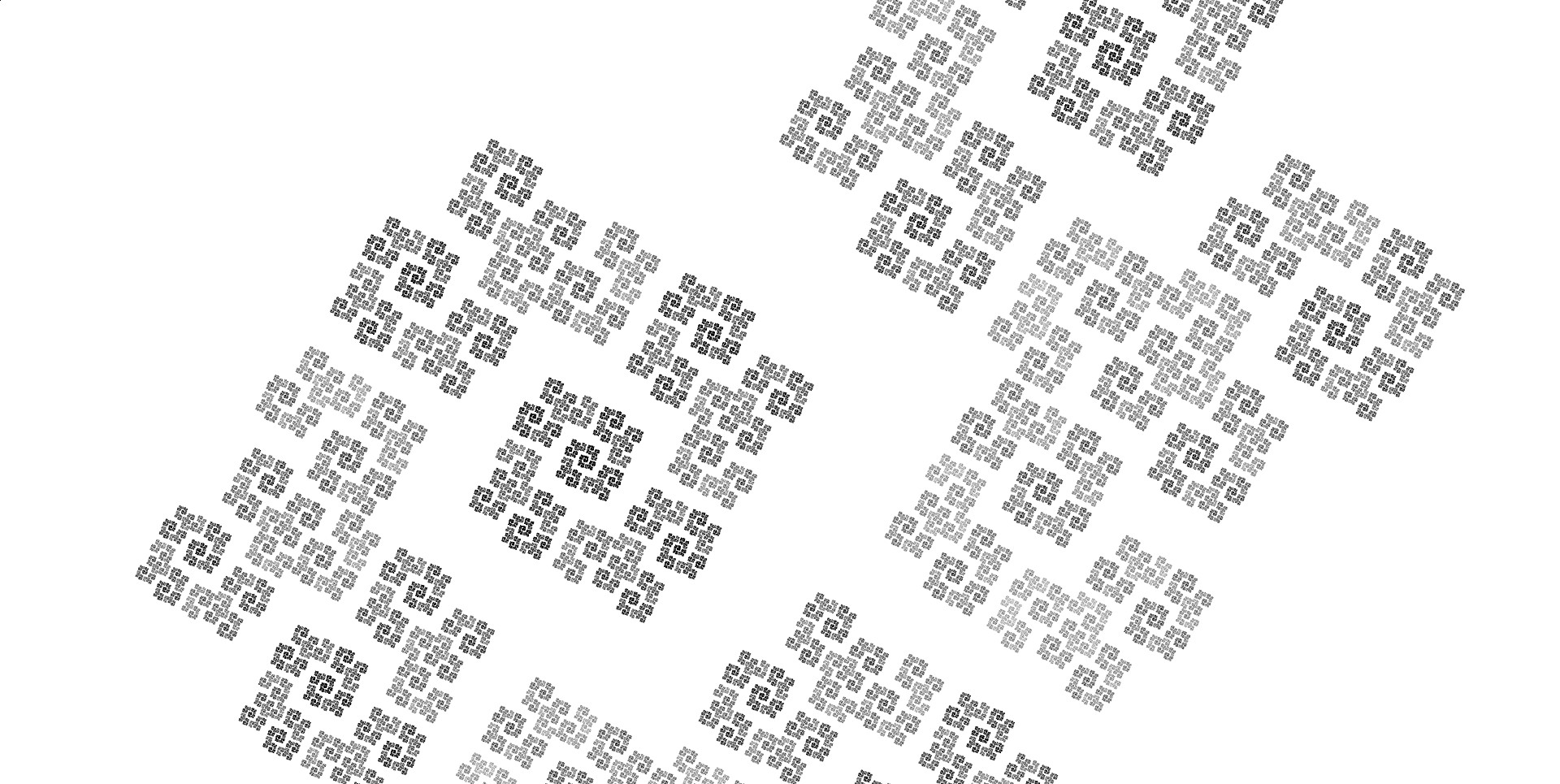 The texture class is subtle and describes the style of the passages in whatever routing, whatever geometry. This property is more qualitative than quantitative one. See below two of the flags often encountered with H.urna maze generators: 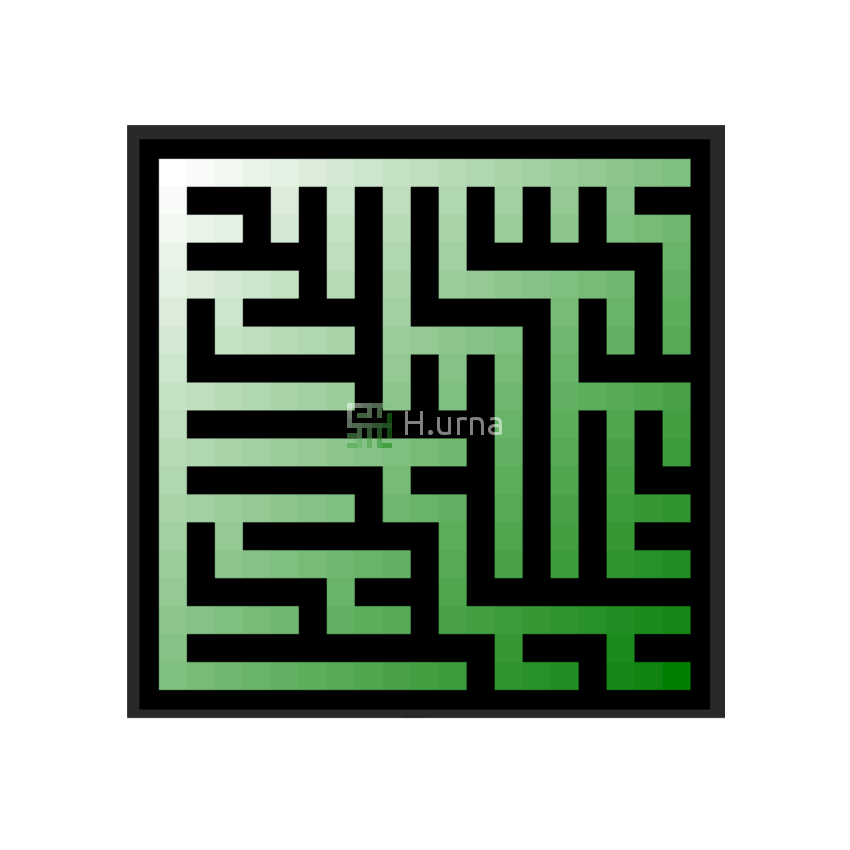 Bias: Binary Tree generator has passages that tend to go in one direction more than the others (e.g. south-east). Source: Michael Jeulin-L using H.urna Explorer 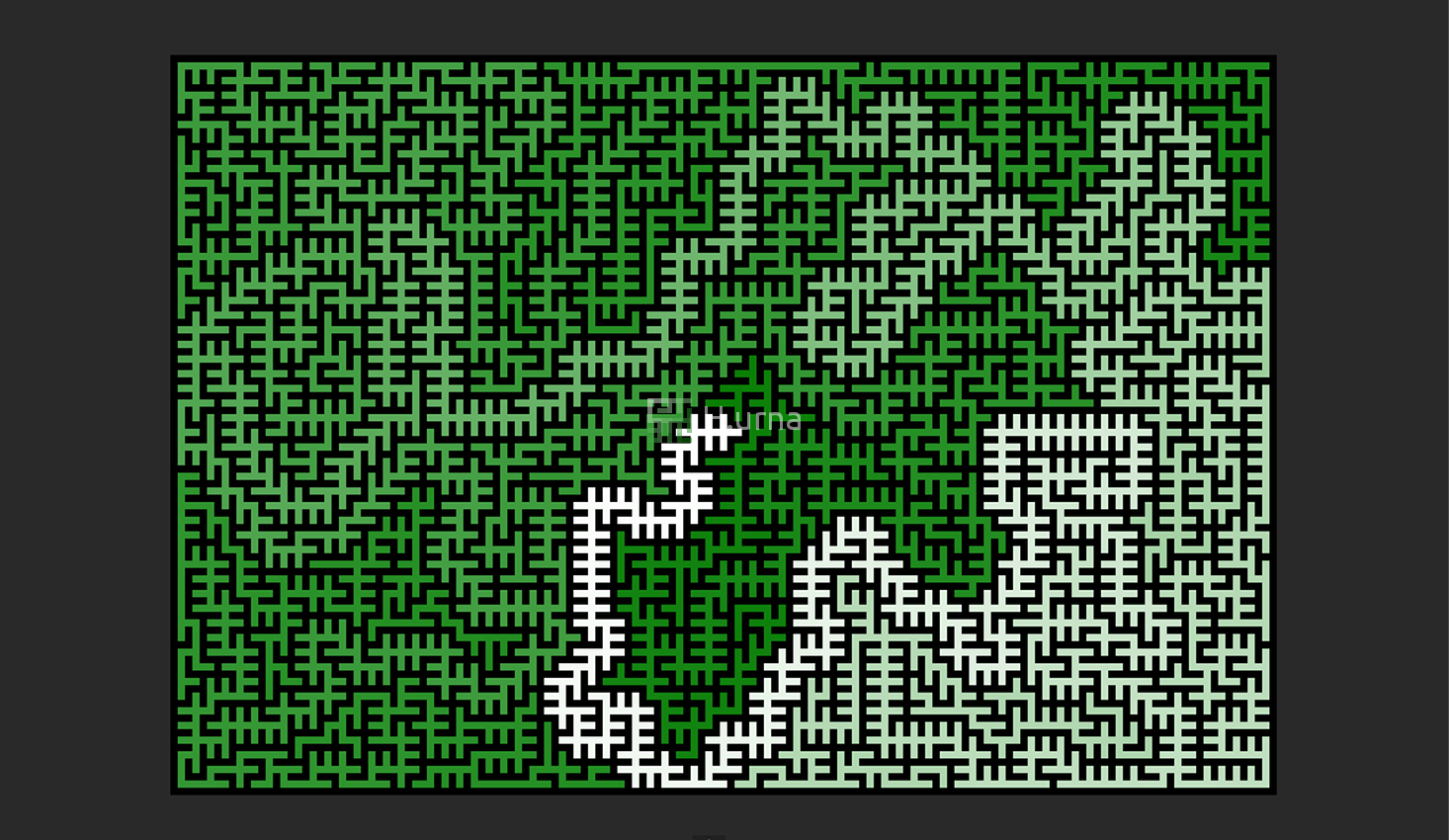 The topology class describes the geometry of the space the maze as a whole exists in: Normal: standard maze in Euclidean space. Planar: any maze with an abnormal topology. Examples are mazes on the surface of a cube, tore, sphere etc.